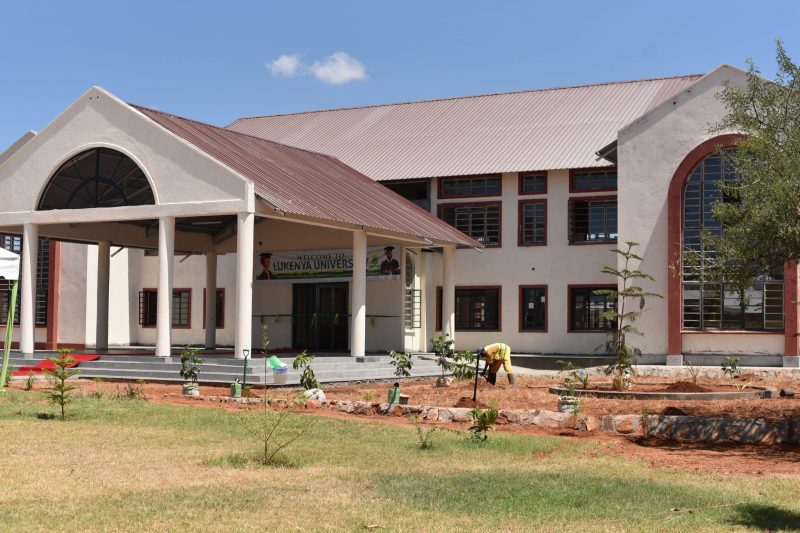 Lukenya University was pleased to host several dignitaries as the university launched the newly constructed Library in a colourful ceremony held at the new  library gardens on 25th March 2021.

The library was christened THE KASANGA MULWA MEMORIAL LIBRARY’ in honour of the late founder, HON.JUSTICE KASANGA MULWA. The Late Justice Mulwa, a Former Mp of Kibwezi constituency and Judge of the high court of Kenya was the Founder of the university and had donated his Farm for the establishment of the university.

At the same event, THE KASANGA MULWA FOUNDATION was also launched by the University chancellor. The Foundation which is run by the Family of the late Mp shall be undertaking charitable activities in Makueni, Machakos and Kitui counties. It shall focus on Education, Health, Agricultural Environmental and other social activities that impact the region and beyond

The chief guest was Mr HASSAN NOOR HASSAN, the C.A.S (chief administrative secretary) in the Ministry of Education. He was flanked by MR. STEPHEN G. K. MAU, DIRECTOR LIBRARY SERVICES, who represented the CABINET SECRETARY for Culture sports and heritage, AMB. AMINA MOHAMMED.

In His speech, the Chief Guest was pleased to note that the University had invested heavily in a library, and he emphasized that the Kenyan Government was keen to support such projects that enhance a reading culture in society. He also asked the students and faculty to use the library to seek knowledge and not to rely too much on mobile phones for academic information. He then thanked the Family of the late Judge, for providing visionary leadership in establishing a centre of knowledge in the arid Makueni county .

The Vice chancellor, PROF. CONSTATINE NYAMBOGA who was the host of the event, spoke about the role the Library in the University and Makueni County as it was now the largest Library in the region hosting up to five hundred students .the library which he described as modern has all the facilities including high speed internet, modern E-library and up to date books in all areas of study.

The presiding pastor, Reverend. Mutinda Musyimi (Dean of students Daystar University), led the congregation in prayers and blessing the building. He thanked the management for inviting him on this special occasion and encouraged the university community to maximise the use of the library facility.

Ms REBECCA MBITHI the Family Bank CEO , who was present by virtue of the fact that the bank had financed the construction of the library , thanked the Board Of trustees for working hard to deliver the library in a timely manner. She pledged to support the university as it grows into a leader in the higher education space.

The Lukenya University student community, participated in the launch by entertaining the guests with two cultural dances, shairis and musical pieces.